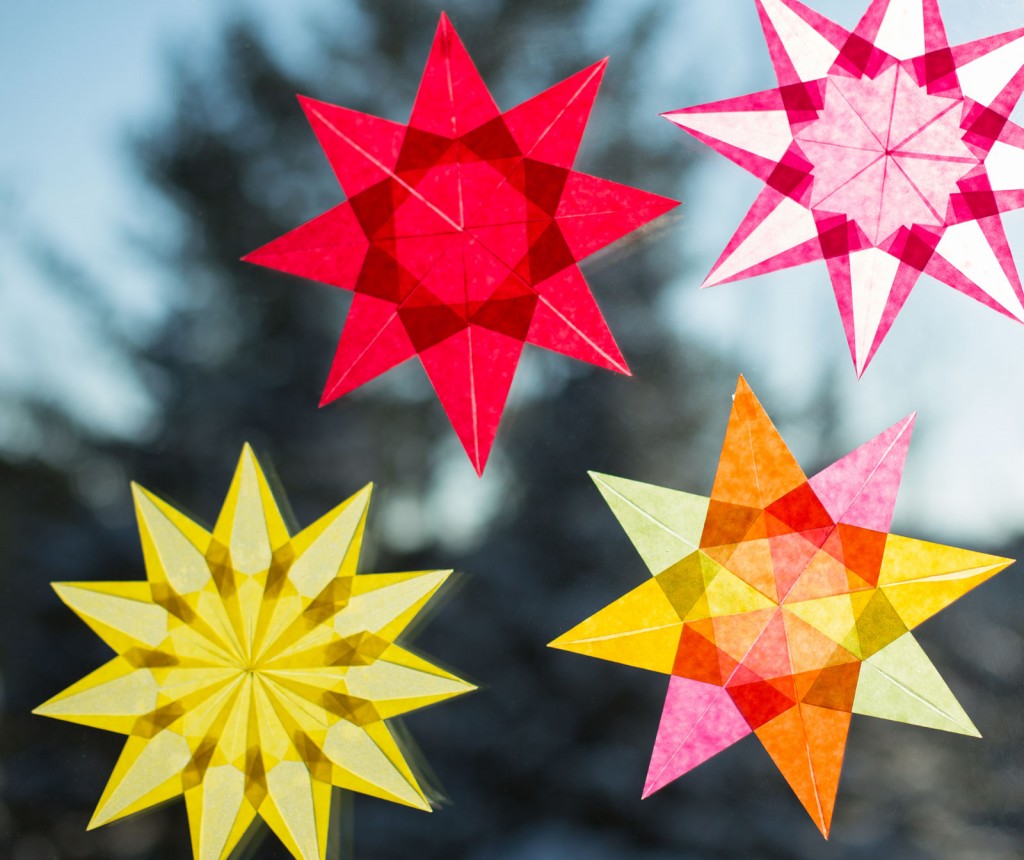 These glowing stars are an easy and satisfying craft for adults and kids ages five and up (and younger, with some help).  If you start with square paper, there’s no cutting involved—just folding and gluing. You’ll need a glue stick and Transparency Paper for this craft—tissue paper works too, though the colors will fade more quickly. There are many ways to fold window stars; here is a quick tutorial for a simple eight-pointed star.

Begin with one square of paper and fold it across diagonally, as shown above.

Bring the bottom right corner up to meet the center crease, and fold to make a point.

Do the same for the upper left corner. Dab a bit of glue under the new folds to hold them in place.

Repeat this process with the remaining seven squares until you have eight points. Flip them over so the unfolded sides are on top.

Place one point on top of another, so that the top point’s short edge lines up with the middle crease of the bottom point, as shown above. Glue in place.

Add the third point on top of the second in the same way. Continue until you have all eight points glued down.

This is what the finished star will look like. Hold it in front of the window to see it transformed into a beautiful, glowing jewel. Put a small piece of double-sided tape at the tip of one of the points to hang it up. Experiment with different colors on your next star: light colors will have the most dramatic effect, as the layering of paper creates more contrast in the design. You can also combine different colors for a rainbow effect. See our book The Christmas Craft Book or Crafts Through the Year for variations on the eight-pointed star and many more window star designs. Happy crafting!

Enjoy this craft offline, by downloading and printing out this handy step-by-step version of the tutorial.
Download

< How to Make Straw Star Ornaments > Why Read Elsa Beskow?