The Life of One Natural Doll

When our second child was born, our son was given a lovely first doll with a soft, cotton, velour body, wool stuffing, and knit cotton face and hands. It was a dear little doll and we encouraged our son to cuddle and tend this doll; he was two and definitely enjoyed doing some of the things for his doll that we were doing with his sister. However, he never really “bonded” with it, preferring plush animals and wheeled items to his doll.

Around the time his sister started walking, she began carrying around this doll. She began tucking it in bed beside her or stroking the tip of his peaked cap when she was distressed or falling asleep. And thus begins the real life of a doll who she named “Stripe”. 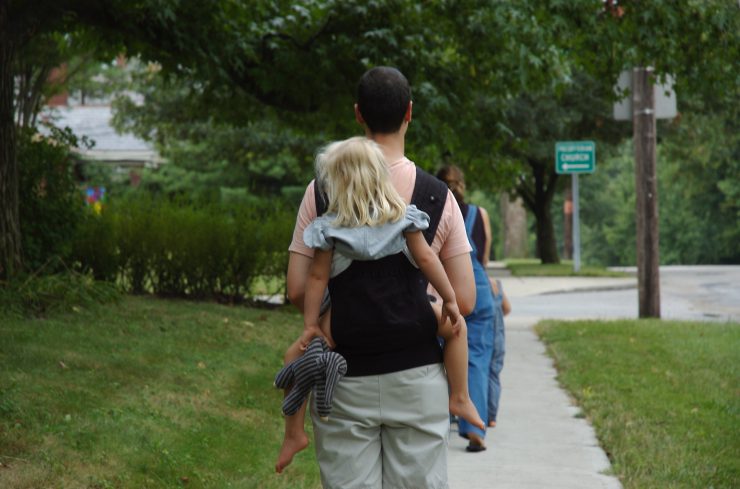 The thing with a natural doll is that they cannot be both natural and made to last forever. Cotton and wool do not wear the same way hard plastic, or even polyester, wear. It was a very short time before the tip of Stripe’s hat showed how much our daughter loved him and how often he was in her hands. Before she was two, she learned how to bathe Stripe, as his face and hands got very grubby with the endless camaraderie he provided. She was even willing to sleep the one night with him drying nearby instead just beside her in bed. 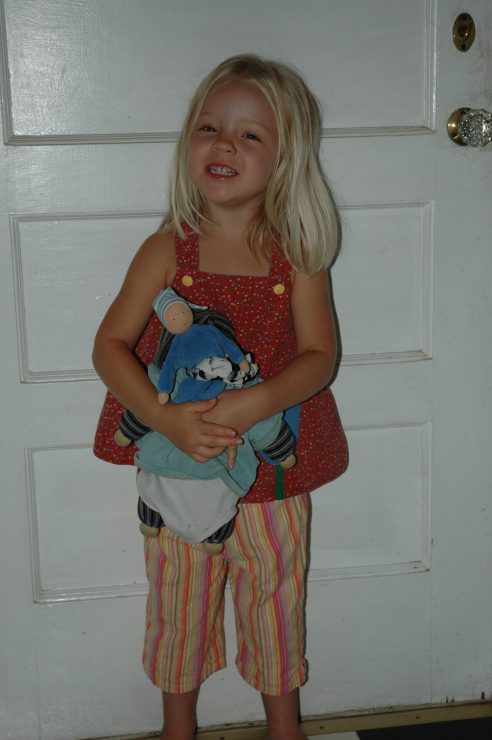 Around the time she was four, she brought him to me to fix. We had already done a few patch jobs; he had gotten a tear in the chest of his jumper, one of his hands had lost a few stitches, his hat had pulled away from his head. These are the sort things to expect with a much-loved doll. However, this time the “skin” of his hands had split. That organic cotton knit gave way under the normal strains of being a small child’s steady companion and now, she was counting on me to make it right.

If you have sewing experience, you know the fabric was too weak to hold new stitches. I looked at the wool poking through and asked if maybe we could just give Stripe a pair of homemade mittens. At first, she refused. She said he would not be the same with the skin of his hands covered up. I waited until the wool began to actually pull free from his wrists, and I asked again if I could give him some mittens. She agreed and we worked together to put velour mittens over his hands, securing them to be a permanent feature.

She quit taking Stripe everywhere with her after his repair. He became a friend she saw only at bedtime, nestling him safely on her pillow when she got out bed in the morning. The rest of us quit seeing him at all. Even when we put her to bed, he was hidden under her covers, seemingly sharing the need for privacy our daughter has. We saw Stripe only when he joined us for car trips or camping, and then we only caught a glimpse of him as she rolled out her sleeping bag or zipped up her suitcase. She was so careful with him that I thought perhaps he had even fallen out of favor by the time she was in about third grade.

Then, when she was 12, she brought him to me again for a repair. His dear, little face had rubbed away, the skin fabric splitting and exposing the wool underneath. She wanted me to sew him a new face, as all her love was sealed up inside this very special little body. I said no. I said a good doll should be allowed to have a lifetime and that he had served her well. She accepted my answer and slipped Stripe back into his rightful place among her pillows.

Now, she is beginning to sort her things, deciding what will go to college with her when the time comes. She is chomping at the bit, desperate to fly away, feeling that high school cannot end soon enough. And Stripe has made the cut; he will most definitely be tucked into her suitcase as she crosses the country, leaving us behind. We just have to hope we’ve poured enough love into that dear little body to carry her far.